When visiting New Orleans, you will surely be asked where (and what) you’ve eaten so far, where you plan on eating tomorrow, and the day after that, and after that… You get the point. Down here in the Big Easy we’re certifiably obsessed with food, and can you blame us? Home to some of the best food in the country (many would argue the world), we have a local talent and passion for our cuisine that is second to none. Since I know making the choice on where to eat can be overwhelming, here are some of my favorite takes on classic New Orleans dishes, where to get them, and what makes them so great.

Shrimp and Grits – This one is a toss up between Atchafalaya and Dante’s Kitchen. Atchafalaya serves their six big shrimp with the tails off but the heads on over creamy grits and completely bathed in a rich, shrimp-stock sauce. Dante’s shrimp are served peeled with Andouille red eye gravy and grits good enough to eat all on their own. Whichever version you choose to sample, beware of the jealous dining companion and their wandering fork.

BBQ Shrimp – I question anyone’s sanity if they don’t think dipping hot French bread into barbecue shrimp sauce is the “cat’s pajamas”. I’ve had this dish multiple places but Mr. B’s is my absolute favorite. Their sauce isn’t too oily and has just the right amount of buttery richness to make asking for a spoon tempting.

The Trio – This is not an official New Orleans term for a dish, per say, but I think Eat New Orleans is brilliant for having it on their menu. Their sampler of gumbo, red beans and rice, and seafood stuffed bell pepper is sure to have you saying “Yeah, you right!”

Fried Shrimp Po-Boy – Gourmet po-boys might be all the rave right now, but the fried seafood classics will always remain my favorites. For a good, cheap shrimp po-boy look no further than Zara’s Little Giant Supermarket. All you’ll need to enjoy this 11” loaf piled with crispy golden shrimp is an ice cold Barq’s and someone you love to share it with. 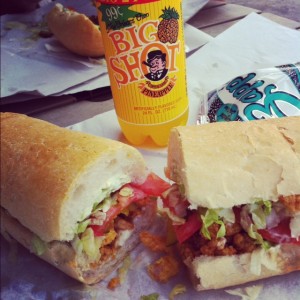 Fish Meunière – Our Gulf fish is some of the most flavorful, delicious fish in the world. My favorite way to enjoy it is in the classic French preparation, “meunière”, where the fish is lightly bathed in flour, sautéed and topped with a pan sauce comprised mainly of butter and lemon. Upperline’s version comes with slow-cooked greens and a piece of homemade cornbread. And if they ask if you’d like lump crabmeat on top for an extra ten dollars, just nod and smile.

No matter where you choose to eat in New Orleans, the probability of some really stellar food hitting your plate is pretty high. Try not to be intimidated with how much cuisine there is to sample (even the locals can’t keep up!) and instead make it a point to try at least one of the dishes listed above. If you’re still indecisive, just ask any number of friendly locals about their favorite New Orleans dishes. Trust me, we like it.