What sets this festival apart is that attendees have the opportunity – BEFORE DRINKING – to partake in NOLA Motorsports Park’s Xtreme Experience, which involves driving “supercars” from Ferrari, Lamborghini, and Porsche. You can also take a ride along with a professional driving instructor any time.

What to expect this year

Now in its third year, the WBBF partners with the 610 Stompers to benefit their non-profit giving program. Expect to see a Stomper or two hanging out busting some extraordinary moves. This year, all VIP ticket packages include a meal voucher along with early entry at noon. (General admission tickets enter at 1 p.m.) Also new this year is a more family-friendly environment. Kids will have access to VR Microsoft stations and craft areas inside, plus giant inflatable water slides in the karting center. There will be live music and raffles for various NOLA Motorsports activities as well.

Doing the driving for you

The festival offers shuttles from three locations: the Rivershack in Gretna; the Barley Oak on the Northshore in Mandeville; Walk-Ons in Clearview/Metairie; and in the Harrah’s Casino Valet Circle in downtown New Orleans. All shuttle tickets are VIP tickets, so that includes the meal voucher and the early admittance. For the rest of June, the VIP shuttle/festival tickets are $50 from New Orleans and Clearview, and $60 from the Northshore. VIP tickets only are $40 and general admission is $30. On July 1, all ticket prices increase by $10. 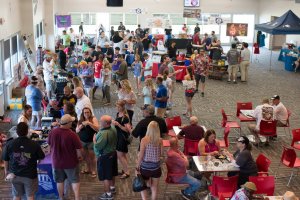 This festival is fun as well as quite different from most others in the area. It offers  a comfortable indoor climate, shuttle options, and the opportunity to do something besides drink (although no one’s knocking that!).

Breweries to Check Out:

Since the number of breweries in Louisiana continues to climb, you’ll find more and more of them at the West Bank Beer Fest. Some of the newer folks on the scene include:

National brands to check out: