Get the Local Gay Perspective

Sign up for your monthly guide of all things lesbian, gay, trans, bi, and queer happening in NOLA.

This is part one in our series of “gay” bar crawls through NOLA. We use the term lightly as there are several places we frequent that are not specifically “gay”… and that’s what we love about this city. For the first crawl, we’re hitting up a few of the most frequently visited and well-known establishments by both locals and tourists alike. Some might call this a more “expected” or stereotypical list of bars in the LGBT community, but don’t fret: we’ll take you down the lesser-known gems of New Orleans gay nightlife throughout the series.

So let’s start with a bar crawl theme everyone knows and loves, Sunday Funday. Print out this handy map, and come on, y’all! 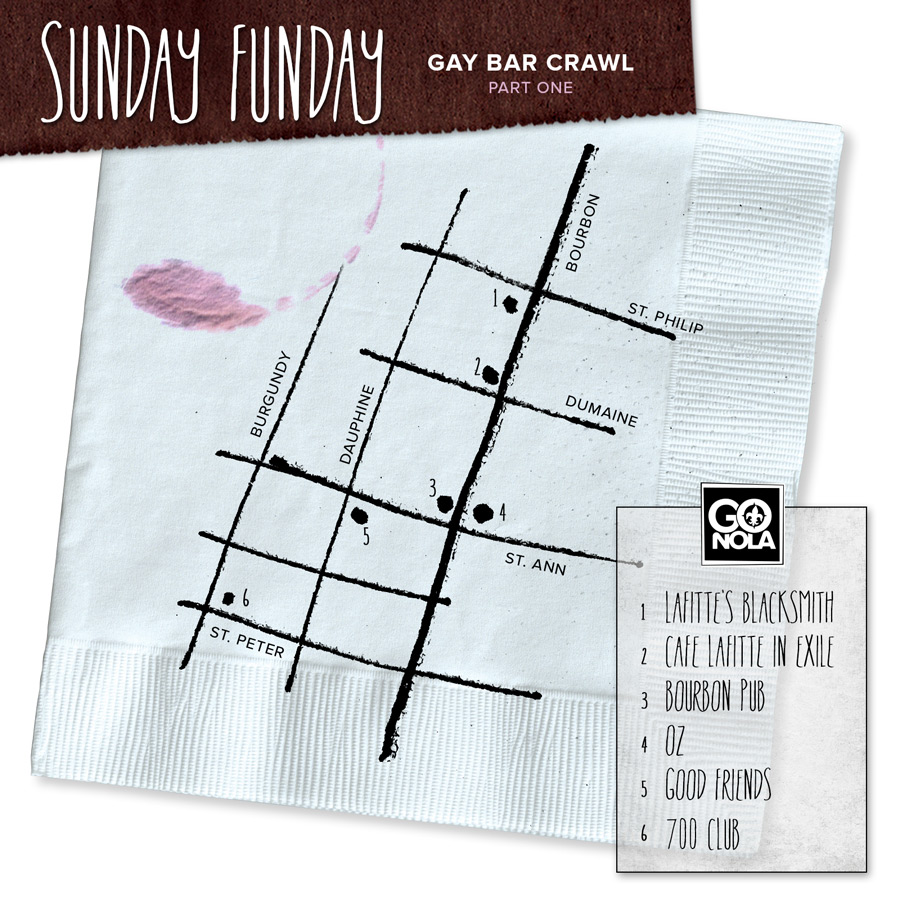 The building, constructed in the French/Spanish colony during the 18th century, is one of the older surviving structures in New Orleans and has been called the oldest structure in the U.S. housing a bar.

Have: A VooDoo Daiquiri, aka a “Purple.” It’s a local favorite. Be careful: just one can knock you on your ass. If you’ve had a Purple already, try their version of a Hurricane. It’s a lesser known but refreshing take on this iconic NOLA cocktail.

New Orleans fact: LaFittes Blackshop Shop Bar is the oldest, continuously operating bar in North America. Of course I had to go in and get a drink! #FollowYourNOLA   A photo posted by Brian Webb (@br_webb) on Jul 25, 2015 at 4:10pm PDT

Not to be confused with the bar you just visited, this Lafitte is the oldest continuously operating gay bar in the United States. This Lafitte’s lost its lease at stop 1 and thus moved down the street to create Café Lafitte in Exile Tip: A long-held tradition called the napkin toss can happen on Sunday, anytime between 4:00 and 10:00 p.m. If you hear the song, “Love is in the Air” you’re in luck.

Have: A beer on the upstairs balcony

Uneeda Biscuit….and a beer in the Quarter. #NOLA

On the corner of St. Ann and Bourbon Streets, Bourbon Pub is a great place to sing along with your favorite hits and show tunes. Want to request a song? Write it down on a bar napkin then reach up and hand it to VJ Brendan in that random-looking window on the side of the bar.

Have: Anything this man gives you (that’s David on the left)

David and Josh here to serve – bartenders with a smile!!!

Walk out of The Pub on Bourbon Street and you’re a few feet away from the #1 gay dance club in New Orleans. The top hits and remixes play all night.

Have: A bottle of water and dance!

Good Friends is known as a locals hangout and is one of the best places to catch the Saints Football games. The Queens Head Pub upstairs has an intimate Victorian setting. A wrap-around balcony has outside seating with sweeping views of the French Quarter Skyline.

This newer local hangout was recently renovated to include a second bar upstairs. The kitchen, now renamed Faubourg Bistro, has grown due to high demand.

Have: PB&J Chicken Wings and a shot of Fireball

You can find this gay bar crawl itinerary on the LGBT NOLA profile. Add it to your own NOLA itinerary and explore the rest of New Orleans at FollowYourNola.com.

For more information and news on the city’s LGBT community, sign up for New Orleans’ LGBT e-newsletter here.

Get the Local Gay Perspective
Sign up for your monthly guide of all things lesbian, gay, trans, bi, and queer happening in NOLA.