So, you’ve come to New Orleans looking for the authentic local experience, the real deal when it comes to music. Well, you’ve come to the right place. But before we begin, you should know that there is no one path to anything good in New Orleans. This is a city full of hilarious misfits and eccentric characters. Artists who are from here or have ended up here know that through and through. The people who live in this city are here because they love it. The spirit of New Orleans reflects the energy of nearly 400,000 people marching to the beat of their own drums. Our porches are our gathering places, our bars are our communes, and our music halls are our places of worship. Let’s explore the road less traveled through music venues of New Orleans.

Julius Kimbrough’s Prime Example is at the top of this list for a reason. Ever since stepping foot in the building—a house-turned-venue with purple walls, umbrellas hanging from the ceiling, and Chef Germaine Gaines cooking up a storm in the second-floor kitchen—for the first time in 2015, I have never doubted that whoever is performing there is playing the best jazz in the city (and potentially the world). Trumpet Mafia, Maurice Brown, Jesse McBride’s The Next Generation, Christian Scott, and many, many other influential jazz cats have stepped foot into Prime not only to play, but to sit down, eat, drink, and recuperate from whatever is waiting for them outside the doors.

Local’s Tip: Bring cash and an empty stomach—and be sure to say hi to Julius at the door when you come in.

If it’s 3 a.m. in the Bywater and you are wondering what happened to the last three hours of your life and possibly your ear drums, then it’s safe to assume that you’ve been at Saturn Bar. Renowned for their Mod Dance nights (the 19th anniversary of which is coming up on November 9), Saturn Bar is the dive bar that taught all the other dive bars how to tie their shoes when they were coming up. From punk rock and metal to cabaret, to Saints watch parties and Monday nights with King James and The Special Men, this bar has literally everything you could want from your corner music venue.

Local’s Tip: Don’t drink your beer too fast as those single-stall bathroom lines have been known to get dicey.

Les Bon Temps Roule—always shortened to Les Bon Temps by locals—is a pillar in the way of small but raucous venues. A little less punk rock than the likes of Saturn Bar with a whole lot more brass band, everyone in your group will be thoroughly entertained after stepping foot into this establishment. The front room hosts the bar and pool tables for the easily distracted while the back room is where you’ll find the music, be it funk, brass, jazz, or rock ‘n’ roll. Plus, someone at one time or another built wooden seats into the exterior of the club so that there are designated spots for all of you who just want to sit outside with a drink and relax.

This nighttime-only coffeehouse may be the best kept secret in Uptown. Neutral Ground is a not-for-profit organization that is staffed entirely by volunteers and music-lovers. Tucked away into a small storefront property off Daneel Street, local and traveling songwriters, vocalists, and small bands begin performing every night at 7 p.m. Sunday nights are reserved for their weekly Open Mic. Be sure to buy a cup of your favorite coffee to support the artists and the Neutral Ground mission.

Local’s Tip: Be sure to down that coffee before settling in on one of the many big-comfy-couch style sofas—I 100 percent fell asleep on one many years back and woke up to the artist on stage singing about me sleeping at her gig.

To the untrained eye, Bullet’s may seem like your average sports bar. But beneath the glow of the red light, there is a favorite juke joint beloved amongst locals and visitors. You can relax and let loose for a [insert sport here] game or dance your butt off during one of the local acts hosted here throughout the week, most notably the first all-female brass band, The Original Pinettes, every Friday night.

Local’s Tip: Don’t see your favorite game on? Ask the bartenders (only if they’re not slammed – don’t be that customer) to ask if they have the channel and will switch the game for you!

The prototype for what is now The Music Box Village, located on the levee between the Bywater and Holy Cross neighborhoods, was constructed in 2011 as a “grand experiment in musical architecture.” It was produced by local DJ Rusty Lazer, local artist Delaney Martin, sound artist Taylor Lee Shephard, and installation artist Swoon. Later versions of the installation were built in New Orleans City Park, Shreveport, La., and even Kiev, Ukraine before the now-permanent venue was opened in 2016. Each installation within the walls of the venue is inspired by the musical and architectural culture of New Orleans. Visitors are encouraged to play and explore and musicians from around the world – including The Preservation Hall Jazz Band, Solange, and Wilco – have graced the stages of the many iterations of The Music Box Village to present one-of-a-kind listening experiences and performances.

Local’s Tip: Bring a jacket for when the sun goes down. The wind off the river during the non-summer months can be biting (I think I just felt the collective eye roll of all my Midwestern friends).

How does Americana on a Friday sound to you? How about psych rock on a Tuesday? Funk on Wednesday? Punk rock on Saturdays, of course, and if you’ve never watched a Spaghetti Western accompanied by a live band, well then Sunday is the night for you. No matter who you are and what you jam out to alone in the car, Banks St. Bar probably has a show that is perfect for you. Staked out on Banks Street in Mid-City with a staff full of quirky and knowledgeable bartenders, Banks St. Bar has recently undergone some welcome renovations without taking the soul out of the local watering hole.

Housed in a stand-alone building on Freret Street with a mural of a dinosaur carrying a pack of PBR covering the adjacent courtyard, Gasa Gasa was where I had one of my first gigs as a New Orleans music photographer back in 2014 (shoutout to funk band Sexual Thunder!). For me, it’s a home-away-from-home in the form of a venue. They opened their doors in 2013 with the intention to highlight not only live music but also local art exhibitions, film screenings, and recording sessions, and have done just that in the years since. Swing by during the day to check out the record collection, grab a drink from the courtyard bar, or, if you’re feeling adventurous, go to a show there without checking the schedule. I guarantee you will leave with a great story to tell to your seatmate on the plane ride home.

Local’s Tip: Take a look around the room while you watch the show–the art on the walls is a constantly rotating collection of local art. 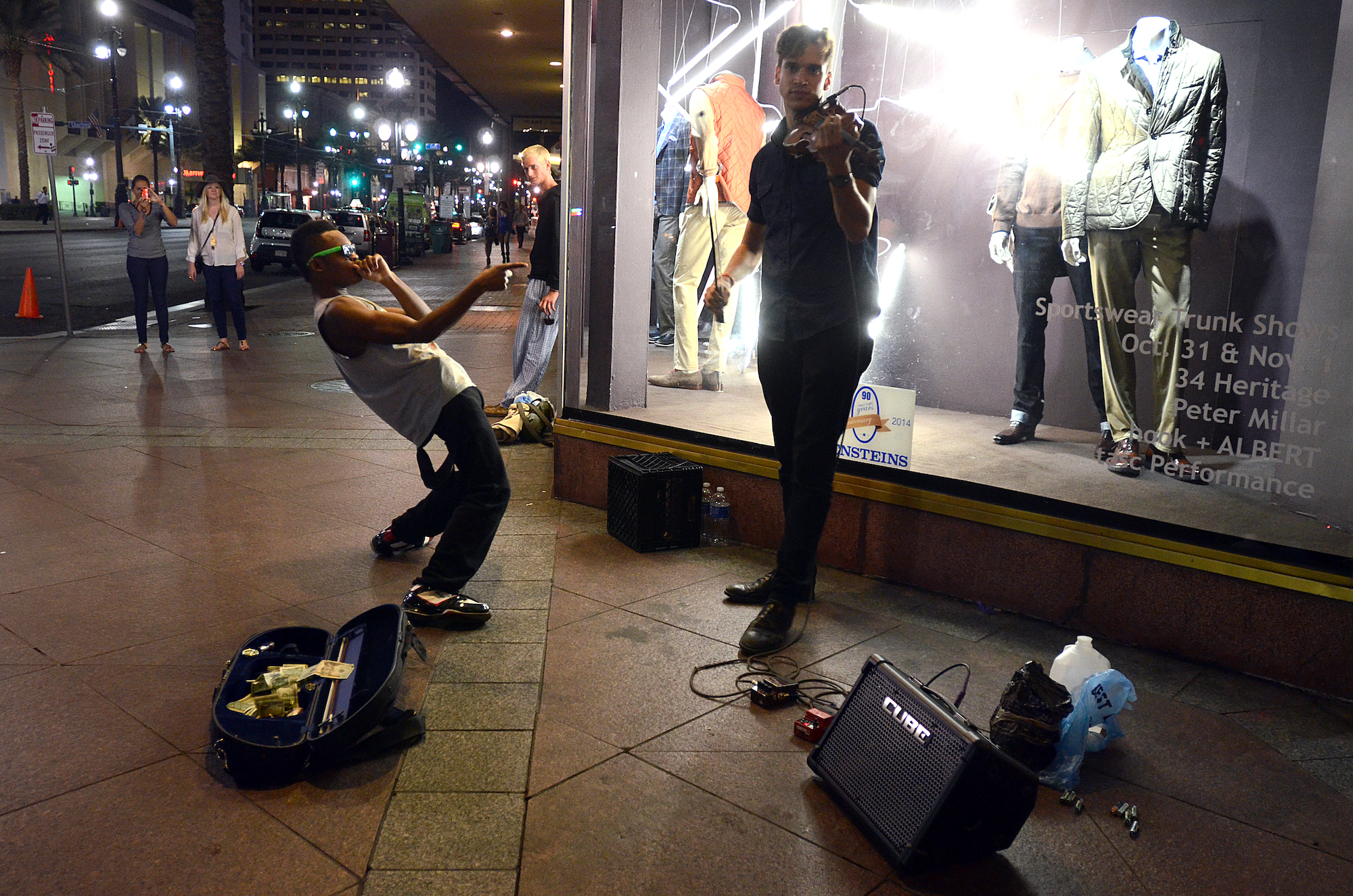 No, this is not the name of a craft-cocktail lounge owned by a mustached hipster who moved here from Seattle three years ago and has been really inspired by the flavors of New Orleans. I mean the literal street. Take yourself out for a walk and you’ll see and hear traveling musicians and troubadours seemingly of yesteryear playing their music from street corners and front stoops. Some of the world’s most famous celebrities began their careers as buskers (Edith Piaf, Robin Williams, and Sheryl Crow to name a few) and the street musicians of this city are no less talented. Tuba Skinny, Tasche de le Roche, the Jackson Square All-Stars, and Tanya & Dorise are just some of the incredible acts you’ll find filling the crowded streets with their daily soundtracks.

Local’s Tip: Wear closed-toed shoes in the French Quarter. Just trust us on this one.