The New Movement‘s third annual Hell Yes Fest (HYF) is on November 12-18, kicking off with an opening night party at One Eyed Jacks, and featuring over 50 acts performing at venues throughout the city. In addition to live performances, this New Orleans comedy festival will also feature a film festival and podcast recordings.  The headliner this year is Emmy-award winner Sara Schaefer (You Had to Be There, Late Night with Jimmy Fallon); you can also expect to see 14 local stand-ups and lots of other talent from across the nation. 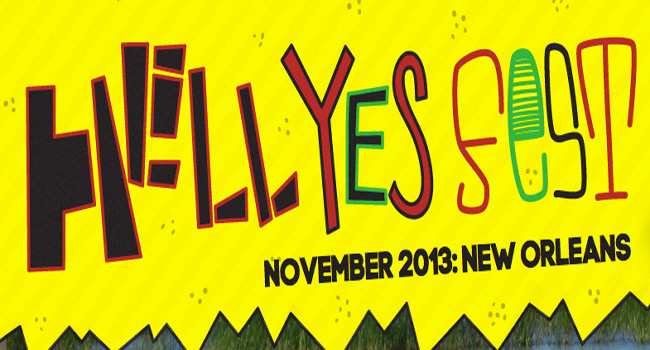 I talked with local comedian Andrew Polk to get more insight about the festival. I first met Andrew in college and consider him to be one of the hardest working, most driven people that I know. He is extensively involved in the local comedy scene, the curator and host of NOLA Comedy Hour which produces a weekly showcase in New Orleans at Hi-Ho Lounge, and tours the country several times a year. He also hosts and produces the weekly Comedy Beast stand-up showcase every Tuesday at Howlin’ Wolf Den.”

GoNOLA: Tell me about Hell Yes Fest and what sets it apart from other comedy festivals.

Andrew Polk: Hell Yes Fest is the Gulf Coast’s biggest and best comedy festival. It features national headliners, ridiculously talented locals, and an amazing film festival. I’ve done a fair amount of festivals, and the best part of HYF is that they don’t take submissions. What that means is the festival isn’t based on out-of-towners paying money to submit videos and get performance time.  HYF is genuine in that they choose the hardest working, and best, local comedians, and then integrate them with national headliners. It’s a fun reward for doing well locally and can lead to great things.

GoNOLA: How did you get your start in the comedy world?

AP:  I’m originally from Ruston, Louisiana and got my start after I moved to New Orleans in May 2011 and decided that I needed an outlet other than posting nonsense to my Twitter. New Orleans is filled with incredibly friendly and talented comics who took me under their wings – like Bette Midler, but with more romance and intrigue, I guess.

GoNOLA: Who or what are you most excited to see this year?

AP:  I’m incredibly excited to see Shipwrecked!, a local story-telling showcase put on by local comedians Sophie Johnson and James Hamilton. It is the most professionally run and marketed show in New Orleans, and their podcast is incredible. Last year’s show at Café Instanbul sold out almost immediately and was headlined by MTV’s Dave Holmes. This year will be bonkers.

I’m also looking forward to the live recording of the Terrified with Dave Ross podcast. It’s a relatively new podcast out of L.A. from Nerdist (You Made it Weird with Pete Holmes, The Todd Glass Show, Nerdist Podcast with Chris Hardwick). Dave Ross is one of the nicest guys on the planet and will be interviewing local comics.

GoNOLA: Where can we find you performing this year?

AP: I’ll be at Café Instanbul Wednesday (November 13) with headliner Todd Barry. Sunday (November 17) I’m hosting my regular show at Hi-Ho Lounge that will have New York/NOLA transplants Scotland Green and Shawn Dugas, as well as a few surprise drop-ins and old friends.

This year is not to be missed! Get your tickets to Hell Yes Fest!