Lance “Varg” Vargas’s bio says it best: “I am the son of a sailor and a social worker, grandson of a gypsy, a dancer, and a nurse. I spent my youth moving from port city to port city, watching a lot of road go by and reading World Book Encyclopedia. After my parents settled down on the Gulf Coast, I was a miscreant youth, destroying cars and taking the wrong things too seriously and the right things not seriously enough. Eventually, I began replacing my imagination with experience.” 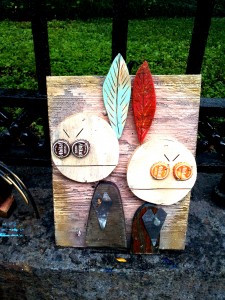 Since 2007, Varg has been creating art, primarily using found wood and objects from around New Orleans. His personal project to refinish his hardwood floors led him to an exploration of how wood reacts to different processes and prompted his first art pieces. He uses restored and salvaged material in every single piece.

NC:  How long have you been selling art at Jackson Square?

LV:  I started in summer of 2008. I was really lucky, because the art colony at Jackson Square was still building its numbers back up after Katrina, and I slipped in. It’s the best thing that ever happened to me, honestly. I was able to flourish as an artist quite a bit. I am in the business of giving people what they want, not what they need, and there is a certain self-actualization about that. 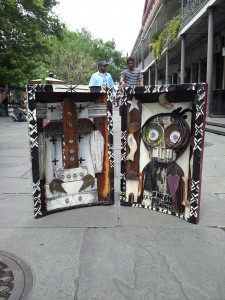 NC:  What is your biggest inspiration, whether in the city or otherwise?

LV:  My biggest inspirations are the antique woods commonly found in New Orleans houses – specifically, heartpine and swamp cypress. Cutting and sanding this wood is a real joy for me. They both have unique smells and textures; I call them “beauty and the beast,” respectively. They are probably already 100 years old when they go in to the house, and then they’re in the house another 100 years, so they are definitely antique. 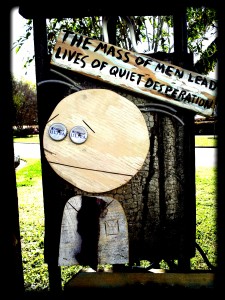 NC:  What is your favorite thing about living and working in New Orleans?

LV:  How authentic it all is: it’s so folk. There is so much to write about, sing about, paint, depict. It is a glorious place! To me, my art is “New Orleans Art” because the inspiration occurred here and the materials I use are New Orleans itself. Take a heartpine piece, for example. This is a tree that was growing when settlers arrived; it’s sitting there in the alluvial soil the city is made on. Then it’s lumbered and made into a house. Then either a renovation occurs, or the house falls into neglect, and I come along and make it into art and hang it on the fence in Jackson Square. So the art is so, so, New Orleans in its very soul. If you have a room in your house that needs a little soul, get one of my pieces – a room can never have enough soul.

NC:  Anything else you want us to know?

LV:  Just please come down to Jackson Square and buy some art! It’s the absolute best place in the city to do it. All of the art is original. You get to meet the artist.  The selection is phenomenal, and it’s a whole lot of fun.

You can find Varg’s art online at leveeland.com, at Nadeau Furniture on Magazine, at Cameron Jones on Decatur, and, of course, at Jackson Square on the weekends. Be sure to also check out his blog posts at thechicory.com! He is open to making art upon special request (i.e. address numbers, custom pieces).

All photos courtesy of Lance Vargas.

This is the second installment in a series covering three of the 200 local artists who sell their work at New Orleans Jackson Square, a cultural epicenter. Conveniently located in the French Quarter between St. Louis Cathedral and Café du Monde, Jackson Square is a place where artists can be found selling their crafts on a daily basis.  Read the first installment on Jackson Square painter Annie Walker.