Just as lobster and white Burgundy or lamb and a nice syrah create a revelatory harmony of flavors, New Orleans Jazz Fest food and music have the same effect. Whether it’s the funky, soulful, raucous or buoyant notes in the music that go well with the smoky, savory, sweet or spicy qualities of the food, there are endless combinations of showstopping pairings. Here are some of our personal favorites featuring local New Orleans artists playing Jazz Fest 2013. Stay tuned next week for our headliner pairings. Use these as inspiration for your own Jazz Fest food and music matches, or find different ones to knock your socks off.

Simply put, Dr. Michael White puts the “New Orleans Jazz” in the New Orleans Jazz and Heritage Festival. Take a break from the big-stage acts and check out Dr. White’s classic New Orleans stylings. Dr. White will perform several tunes from his latest album, “Blue Crescent,” as well as other songs that inspire him. Dr. White was born and raised in New Orleans, his clarinet playing draws inspiration from Johnny Dodds, Jimmie Noone, Edmond Hall, George Lewis, among others. In addition to his numerous publications and 11 albums, Dr. White currently holds the Keller Endowed Chair in the Humanities at Xavier University.

We’ve paired Dr. White with a food dish that is classically New Orleans, Red Beans and Rice. Like Dr. White’s music, Burks & Douglas’ red beans located in Food Area I are a mix of subtle flavors, easily amped up by a dash of hot sauce! See Dr. Michael White play and have your red beans on Saturday, May 4 at 3:10 p.m.

Picture it: you’re sitting back in your chair overlooking the passers-by and it’s the hour of day filled with golden light, the right temperature for anything, and you’ve got a glass of fresh squeezed lemonade resting comfortably on the arm rest of your rocking chair.  The music wafting softly over the open air is none other than Gal Holiday and the Honky Tonk Revue, and the lemonade came from Joyce’s Lemonade here in New Orleans.  It’s the perfect evening at that point.  It’s something that people in the future will look back upon and say “Man I wish I was born back then, life was so simple.”  And you, here, at Jazz Fest are living it right now – just soaking it all up and enjoying it to the fullest. 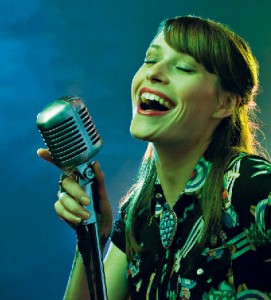 Gal Holiday and the Honky Tonk Revue is a New Orleans-based country swing band.  Singer Vanessa Niemann started the band in 2004 which features some of the best country pickers that the Crescent City has to offer.  Having released two full-length albums already, the first of which was sold out after two pressings, they are well on their way to being a staple of the New Orleans music scene.

On to the lemonade that you’ll be enjoying in this future world we’ve created, it hails from Joyce’s Lemonade, which is one of the many delicious food vendors that will be featured at Jazz Fest this year in Food Area I.   It’s a well known fact that food at Jazz Fest is some of the best in the world.  Some people go to Jazz Fest more for the food than the music even!  So when you’re trying to orchestrate that perfect evening, grab a lemonade and sit back and enjoy that country swinging goodness from Gal Holiday on Friday, May 3 at 11:10 a.m. and 5:15 p.m.

Some JazzFest purists will bemoan the intrusion of non-jazz acts at the Fest, but nobody complains when Dumpstaphunk takes the stage. Ivan Neville put together an all-star group to play at Jazz Fest in 2003. The band plays Jazz Fest annually as well as other festivals. Along with Ivan on keyboards, the band features two bass guitarists, Tony Hall and Nick Daniels, III. Ian Neville plays guitar, and Nikki Glaspie drums. All but Ian share lead vocals duties, delivering New Orleans funk that peels paint off of walls. You’ll hear solid, old-school funk in the tradition of The Meters and Parliament Funkadelic, but Dumpstaphunk is not a static concept; the band brings gospel, blues, and a bit of rock-n-roll into the mix. Dumpstaphunk tap family and friends regularly. Troy Andrews, as well as the Rebirth Brass Band, perform on their new album scheduled for a May release.

What better way to pair with down-to-earth New Orleans funk than BBQ Chicken! Ms. Lil of Lil’s BBQ in Slidell has been with the Fest for over 35 years, serving her famous BBQ chicken, both on the bone, and as a sandwich. That’s BBQ that’ll stick to you like Dumpstaphunk’s sound! Enjoy both on Saturday, April 27 at 3:35 p.m. Find Lil’s BBQ in Food Area I.

Though not a native New Orleanian, Jeremy Davenport may as well be – he’s been an integral part of the local music scene for years: the Davenport Lounge at the Ritz Carlton is named after him, he headlines there three nights a week, and he also has strong ties to the Marsalis family. As a vocalist and trumpeter, Davenport is known for blending traditional jazz with his own edge. His music is perfectly paired with the Jazz Fest offerings of Li’l Dizzy’s Café: Crawfish Bisque, Creole Filé Gumbo, and Trout Baquet. Li’l Dizzy’s is not a “fine-dining” New Orleans establishment and has more of a relaxed vibe, but these are definitely some of the fancier items available at Jazz Fest! Get you some and see why people flock to Li’l Dizzy’s for the infamous lunch buffet! Enjoy Jeremy Davenport and Li’l Dizzy’s on Friday, April 26 at 2:30 p.m.

The Breton Sound and Crawfish Beignets

Making their Jazz Fest debut this year, The Breton Sound (named for a body of water off the coast of the Mississippi Delta), bring a great deal of experience to the stage. The band began with the duo of Jonathan Pretus (guitar/vocals) and Stephen Turner (lead guitar), and various friends on bass and drums. Over the past year, the pair solidified the lineup by adding Brian Pretus (Jonathan’s brother, on bass/vocals) and Jonathan Alcon (drums/percussion).

The Breton Sound describe their rock stylings as “focused” and “restrained,” which are both quite accurate. The Beatles-esque vocals of Jonathan Pretus (formerly of Cowboy Mouth), combined with harmonies from his brother, Brian (formerly with the progressive rock band Epic), make for a wonderful experience.

When asked what Jazz Fest food should be paired with The Breton Sound, Jonathan Pretus suggested Crawfish Beignets from Food Area I. Served as an individual portion or on the Patton’s combo plate (shown with an oyster patty and “crawfish sacks”), crawfish beignets are much like the band. At first glance, they look restrained, but when you bite into them, the flavors attack and win you over.

Bonerama and the Grandstand’s oyster bar go together because they’re both off the beaten path.  For Bonerama, it is their music that is off the beaten path.  In fact, it really isn’t on any one particular path.  Listening to a Bonerama song and you may find yourself being led on a journey through traditional brass brand sounds that morph into funk before crashing into classic rock.  The oysters, on the other hand, are both figuratively and literally off the beaten track hiding in the grandstands.  Not only are the oysters well away from the well traveled areas of the inner ring and the Heritage Square, to get to them you’ve got to cross the well trodden horse track to get there.  But don’t worry, raw oysters and air conditioning will make your trip well worth it.

Bonerama appears Friday April 26 and the oysters reside in the Grandstands.

Big Sam’s Funky Nation and the cochon de lait po-boy are two local favorites that celebrate the flavor and soul of the South. Sam grew up perfecting his tunes on the trombone, just as Walker’s slow cooks their pork to fall-off-the-bone perfection. Both have a heartiness, tenderness, and element of cool – whether it’s the shiny brass bone, starched shirt, and sunglasses or the crisp coleslaw piled atop the steaming hot pulled pork. Either way, Big Sam’s Funk Nation and Love at First Bite come together to bring us something hot, something fresh, and something that’s guaranteed to make us dance for joy. I recommend enjoying both at the same time, on Sunday, April 28 at 1:50 p.m.

I’ve got good news and Good News. The good news is that once again, the famed Crawfish Monica will be available from Kajun Kettle Foods in Food Area II at Jazz Fest this year. The Good News is that the Zion Harmonizers, New Orleans’ longest-running gospel choir, will be performing at JazzFest. Listening to the Zion Harmonizers while burying the non-ear parts of your face in the creamy, savory combination of the Crawfish Monica will make you feel like you’ve gone straight to Heaven.

When most people plot out their calendars at the beginning of the year, the last weekend in April and the first weekend in May are often just the first hints of summer.  To New Orleanians, these weekends mean Jazz Fest is upon us.  Because summer is beginning to rear it’s head, staying refreshed and hydrated is the key to a magnificent Jazz Fest experience.  The Rose Mint Iced Tea in Food Area I is a personal favorite of mine because it is not too sweet but also wows the taste buds just enough.  Like this refreshing mid-day beverage, John Michael Rouchell’s new sound that can be heard on Saturday, April 27 at 12:30 p.m. on the Acura Stage will surely pep one up and get the juices flowing for the remainder of your Jazz Fest excursion.

Hurray for the Riff Raff and Ninja

Just like the Shrimp Yakisoba from Ninja Japanese Restaurant at Food Area II this year,  New Orleans is both deeply rooted in tradition and open to outside influence.  And it’s probably this quality that attracted Alynda lee Segarra of Hurray for the Riff Raff to the city.  Originally from Puerto Rico and the Bronx, Alynda reframes ‘American Roots’ music at least as delightfully as Ninja reframes Creole food.

Calling a spicy Natchitoches meat pie an empanada is like saying that Chris Owens is just a woman. Like a spicy meat pie, Chris Owens has sunk long roots in Louisiana – she’s been operating her Bourbon Street cabaret act and club since the 1960s. The parallels go on. A blending of Latin and native traditions. Decades of experimentation. A flavor that has dubbed “moderately spicy”.  A hot dish threatening to bust open at the seams. And In the case of legendary Ms. Owens, an exceptional list of ingredients may surpass the pie to include leather, pleather, lace, and feathers, sequins, fishnet, assorted zebra prints, maracas and sombreros. Find the meat pies from Mrs. Wheat’s Foods in Food Area II.