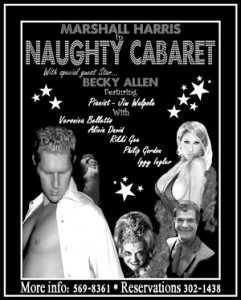 If you’re  out and about in the French Quarter and looking for a naughty, bawdy, feathers, and boas good time, then head on over to One Eyed Jack’s for a dose of “Naughty Cabaret”. Live music and comedy, in the style of old New Orleans cabaret, this show will entertain like no other. “Naughty Cabaret” stars Marshall Harris of the hit Off Broadway show “Naked Boys Singing”, and who has been seen most recently as “Rocky” in the New Orleans Production of “The Rocky Horror Show, and as “Lancelot” in the local production of “Camelot”.

Becky Allen who’s resume’ in entertainment weaves itself directly into the History of New Orleans itself.  It has been said “When you meet Becky Allen, you’ve met New Orleans.” The show also has Veronica Belletto, Iggy Ingler, Rikki Gee & Philip Gordon.  There will be two performances at One Eyed Jacks, 615 Toulouse St., New Orleans, two blocks from the river, in the historic French Quarter, May 29th at 8pm & 10pm. Tickets are $35 cash at the door. Reservations encouraged by calling 504-302-1438