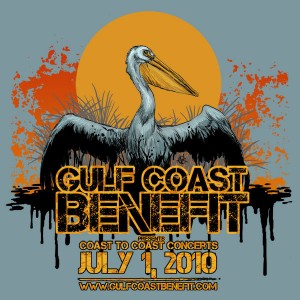 On Thursday, July 1st, Tipitina’s, along with 80 other venues from around the country, joined together to host a series of benefit concerts to aid those affected by the Gulf Coast Oil Spill. The Gulf Coast Benefit, spearheaded by a small team of volunteer coordinators, partnered with the Gulf Restoration Network in an effort to raise $100,000 for the crippled region. While I can’t speak for what transpired at other venues – though judging by the Twitter streams, similar accounts abound – the energy, the enthusiasm, and the enormous mass of convulsing bodies are strong indicators of success.

Here in New Orleans, groovemasters Galactic, with a little help from funkateers Ivan Neville and the Rebirth Brass Band, wasted no time turning up the heat. Swamp sages Coco Robicheaux and the Reverend Goat Carson, joined by keyman John “Papa” Gros, kept the party going with a set of ragged blues and wise tales. Soon the brass barrage of the Young Fellaz Brass Band and the We Are 1 Brass Band had the crowd bouncing up and down. But it was the stinging, soul-funk of the Joe Krown Trio, featuring Walter “Wolfman” Washington and Russell Batiste, that seemed to resonate the most with those in the room – especially when fellow funk heavyweight Big Sam jumped on the stage and shook the rafters with blasts from his trombone. Putting an exclamation point on the evening were rock favorites Rotary Downs, who ripped through a set which included several songs from their recent album Cracked Maps and Blue Reports as well as a dizzying cover of The Beatles’ “Get Back.” Have a peek at the slideshow below to catch a glimpse of or relive some of the highlights from this inspiring and unforgettable event.

For more information about the Gulf Coast Benefit and the Gulf Restoration Network visit http://www.gulfcoastbenefit.com and http://www.healthygulf.org.