Art, like the heat of a New Orleans summer, is almost symbiotic with human existence. Precursors to modern humans created the oldest known geometric art over 400,000 years ago while our human ancestors left behind cave drawings over 30,000 years ago. Our proclivity to create helps us to learn from the world around us and to wrestle with the challenges it presents in order to find meaning.

Several local institutions have special exhibits lined up for the summer that provide a quiet space for contemplation. Time travel to France’s Age of Revolution or around the globe to Iraq. Get lost in the blurs of abstract art or guess at what the faceless street artist Banksy was trying to say. Below is our selection of summer art exhibits. Bonus: air conditioning provided.

You Are Here: A Brief History of Photography and Place

The New Orleans Museum of Art’s new exhibit You Are Here demonstrates how photography can both facilitate and impede our understanding of the world, inviting us to think more deeply about how photography affects our experience of the world and other people in it,” said Brian Piper, Andrew W. Mellon Curatorial Fellow for Photography. The exhibit is developed almost entirely from the museum’s permanent collection and features the work of Lola Alvarez-Bravo, Anna Atkins, Eugene Atget, John Divola, Peter Henry Emerson, Gordon Parks, Edward Steichen, Carrie Mae Weems, and many others.

Ending soon, the Paper Revolutions: French Drawings from the New Orleans Museum of Art exhibit examines draftsmanship through the lens of political and stylistic change during France’s Age of Revolution (1789-1870). In a time period known for its violent instability, new styles of art emerged, including Neoclassicism. “These drawings are intimate in scale, and offer profound insight into the artistic practice of great French artists, from David to Delacroix,” said Kelsey Brosnan, Zemurray Curatorial Fellow for European Art at NOMA. The exhibit concludes with NOMA’s Bastille Day Fête.

Bodies of Knowledge examines the ways in which language informs our cultural identities. The immersive exhibit at the New Orleans Museum of Art features eleven contemporary artists from around the globe and uses books, silent film, ink, musical scores, and more as the vehicles for this contemplation. In Zhang Huan’s portrait series, the artist visually documents a performance in which the names and stories of his family history and Chinese folktales cover his face. Wafaa Bilal’s installation, a meditation on the burning of Baghdad’s libraries during the 2003 American invasion of Iraq, invites museum visitors to place donated books on shelves. Following the close of the exhibition, they will be shipped to the College of Fine Arts at the University of Baghdad.

Courtney Egan is a New Orleans born digital artist and founder of local visual art collective Antenna Gallery. Her projection-based installation, Courtney Egan: Virtual Idylls, plays on an intermingling of botanical imagery with sculpture and technology. The exhibit contemplates how technology affects our perception of the natural world. It is on view this summer at the Ogden Museum of Southern Art.

Piercing the Inner Wall: The Art of Dusti Bongé

Dusti Bongé is widely recognized as Mississippi’s first Abstract Expressionist painter and also as the first to consistently work in the Modernist style. Piercing the Inner Wall traces Bongé’s artistic journey with a body of Cubist, Surrealist, and Abstract Expressionist work drawing on the Mississippi Gulf Coast, New Orleans, and the New York School. The exhibit is on view this summer at the Ogden Museum of Southern Art.

Art of the City: Postmodern to Post-Katrina

The Historic New Orleans Collection, a museum, research center, and publisher dedicated to preserving the history and culture of New Orleans and the Gulf South, celebrates the opening of its new Seignouret-Brulatour Building with Art of the City: Postmodern to Post-Katrina, presented by The Helis Foundation. The exhibits features the work of over 75 artists with connections to New Orleans, including Candy Chang, Brandan Odums, Rontherin Ratliff, and Krista Jurisich. The contemporary pieces, created over the last several decades, are inspired by and speak to life in New Orleans.

Identity Measures at the Contemporary Arts Center New Orleans is an open call exhibition showcasing the work of 23 artists. Through a range of contemporary pieces and materials, the exhibit explores the idea of personal and collective identity, its fluidity, and the socioeconomic, geographical, historical, and many other factors that influence it. Its opening reception coincides with Hancock Whitney White Linen Night on Saturday, August 3 from 5:30 to 9:30 p.m. 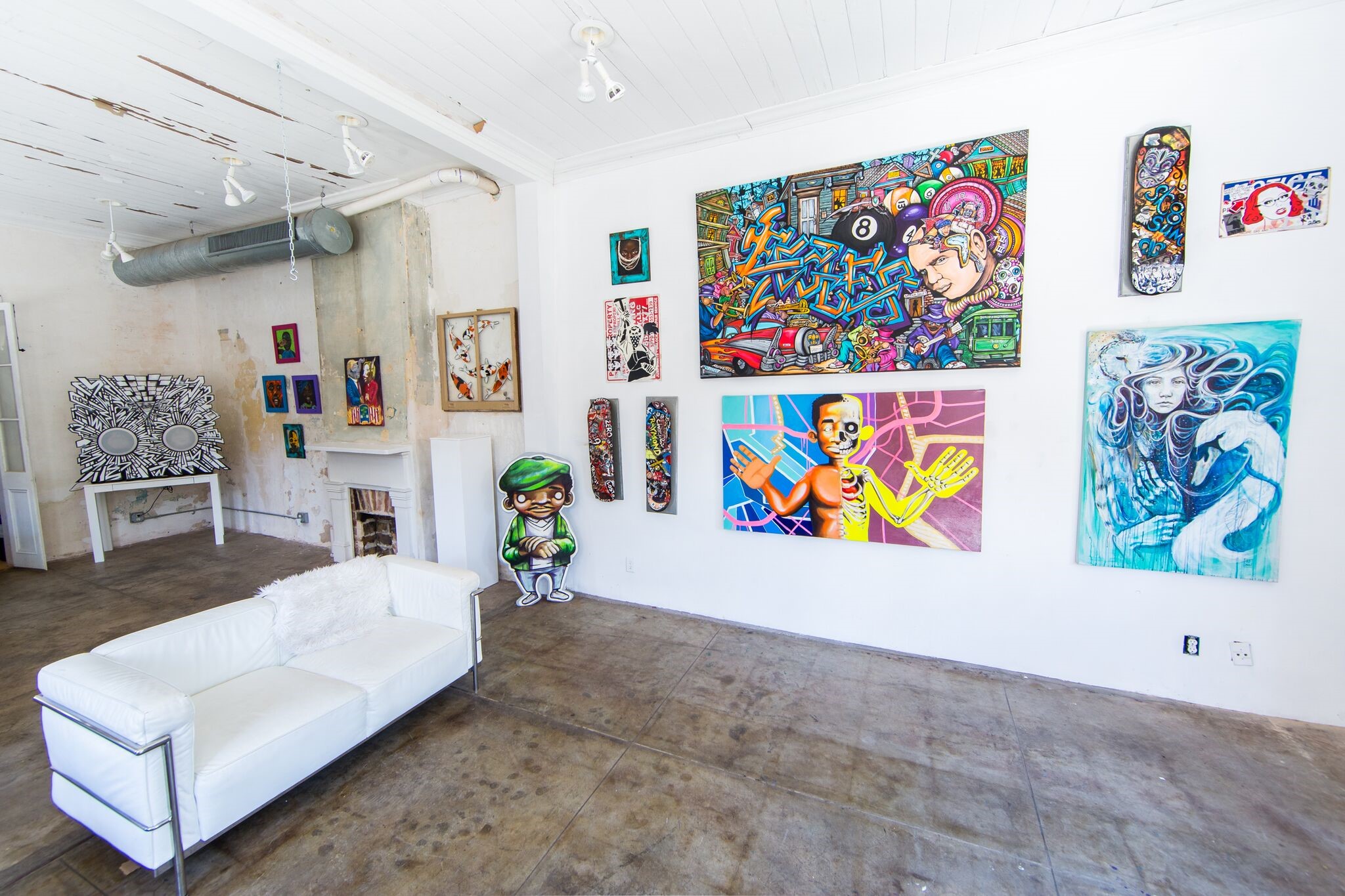 Who says summer camp is just for kids? Tap into your inner child with Art Camp. Explore the galleries on Julia Street during the annual White Linen Night, make headdresses in the Marigny with local art collective, Where Y’Art; tour The Historic New Orleans Collection’s latest exhibit and meet the Old 77 Hotel & Chandlery’s 2019 summer Artists in Residence during Art Camp in August.

Banksy, perhaps the most notorious and elusive street artist in the world, left behind 14 murals in New Orleans in the wake of Hurricane Gustav in 2008. The majority are now lost, but “The Looters,” rescued from demolition by local preservationist and developer Sean Cummings, now stands restored in the International House‘s lobby. The mural, which depicts two members of the National Guard loading electronics into a shopping cart, is a typical Banksy meditation on our society and the things we value. The mural is accompanied by a small exhibit in an adjoining room which showcases the rescue and conservation timeline of the piece.

Jam out with Free Concerts at Wednesday at the Square

Best Places for Seafood During Lent in New Orleans