The Besthoff Sculpture Garden in City Park is one of our favorite free attractions in New Orleans, and an oasis of tranquility, art and beauty in City Park. (Photo: Paul Broussard)

For years, the Sydney and Walda Besthoff Sculpture Garden has been home to dozens of primarily 19th and 20th century sculptures from around the world, valued at more than $25 Million. And it’s that collection of art, almost entirely donated by philanthropists Sydney III and Walda Besthoff – combined with a landscape that has delighted visitors to City Park for 165 years – that has made this New Orleans gem one of the most highly rated sculpture gardens in the world.

On Wednesday, May 15, New Orleans Museum of Art (NOMA) will unveil its 6.5-acre expansion to the Garden, and we’re all invited. So let’s take a look back at the origin of the beloved Sculpture Garden that has earned awards from both the American Society of Landscape Architects, as well as the American Institute of Architects.

History of the Garden

The Sydney and Walda Besthoff Sculpture Garden originated in the corporate headquarters of a drug store chain called K&B Incorporated. K&B (Katz and Besthoff) was founded by partners that included Sydney’s grandfather in 1905.

Sydney served as chairman and CEO of the business and in 1973, K&B acquired an office building (still called “K&B Plaza” today, even though the Besthoffs have since sold the property) overlooking Lee Circle. Included with the building was an 18-foot-high granite fountain designed by Isamu Noguchi, a Japanese American artist and landscape architect, called The Mississippi, that is intended to illustrate water spilling from its crescent-shaped top to signify the river’s shaping of New Orleans.

However, the water feature wasn’t functioning properly when Besthoff purchased the property, and Besthoff said the investigation into its repair sparked his interest in sculptures.

He and his wife, Walda, commissioned their first two sculptures shortly after, and they began traveling through Europe, looking for works to add to their growing collection. They installed the larger works in K&B’s plaza, and displayed the smaller pieces inside of the building.

In addition to a newfound love of sculptures, the Besthoffs were also active philanthropists. They established their own foundation in 1977, and Sydney joined NOMA’s board in 1992. By then, Besthoff had already been in discussion with the museum about a space for the public to enjoy the works he and Walda had collected over the last two decades.

A lease agreement was signed in 1997, the designers of the space were named in 1998, and later that year, the Besthoffs donated the initial 24 sculptures from his own collection.

Finally, on November 23, 2003, the garden’s gates opened to the public and over the years it’s become a treasure to the City of New Orleans. “What makes it so special,” explained NOMA’s Director, Susan Taylor, “is how world-class sculpture has settled into the landscape to create a completely immersive art and nature experience.”

Today, that original segment of the space now houses 64 sculptures, and its commitment to presenting breathtaking art in a relaxed and authentically Louisiana setting attracted more than 142,000 visitors in 2018.

The expansion of the Sydney and Walda Besthoff Sculpture Garden has been under construction for more than a year. It will add to an experience already beloved by New Orleans locals and visitors alike.

There’s a lot to see in the 6.5 additional acres of the Sculpture Garden. The expansion includes an installation of 26 new pieces of art, 800 feet of bridges, and 2,800 feet of ADA-accessible paths. Inside you’ll find 65 new trees, 475 shrubs, 1.7 acres of groundcovers, 1.13 acres of open lawn, and 9.35 acres of aquatic planting; as well as the creation of an indoor sculpture pavilion and an outdoor amphitheater with beautiful, grass-stepped seating. 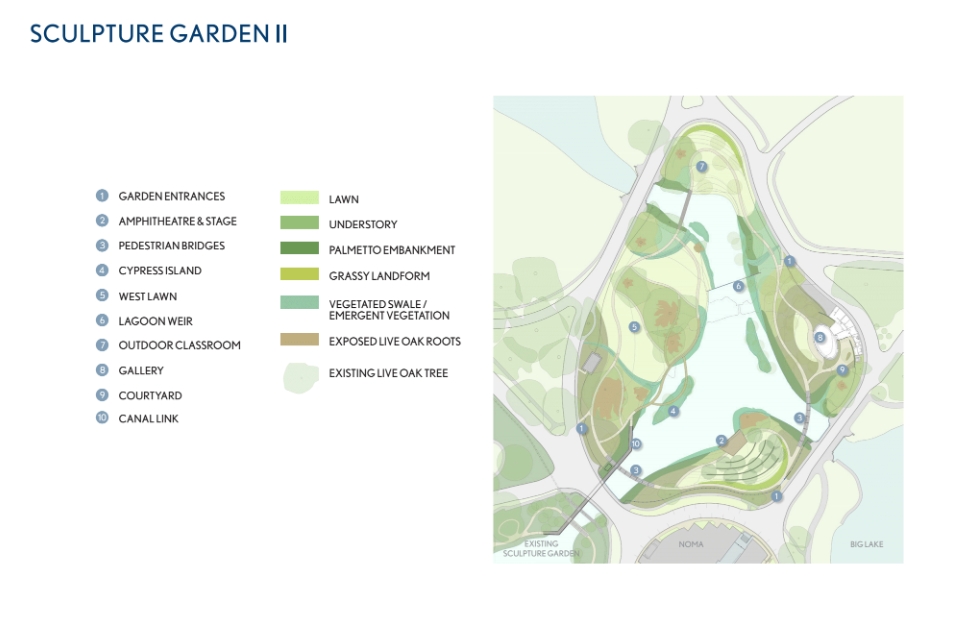 In collaboration with landscape design firm, Reed Hilderbrand — they’ve been able to incorporate this additional waterway with features that strengthen the lagoon’s shore, improve water quality, and address flooding concerns. “It even reduces the load on the municipal drainage system!” explained Margeaux Krane, NOMA’s Communications and Marketing Manager.

There are also important ways in which the new sculptures will differ from the original sculptures in the garden. “The original garden focuses on 19th and 20th-century sculpture,” Krane said, “and the works were selected from the Besthoff’s collection because of their significance in the larger narrative of the history of modern sculpture. “The pieces in the expansion, on the other hand, are almost entirely from the 21st century, and were selected specifically with our Garden in mind.”

The second is a wall created by Teresita Fernandez, a Cuban-American visual artist who was inspired by her travels to New Orleans. Visitors will see the lush flora and rich waterways she admired on her visits, represented in a beautifully tiled mosaic.

Several pieces for the expansion were acquired from across the globe, while others have previously been displayed in the city, such as Hank Willis Thomas’ History of the Conquest, which delighted New Orleanians in its temporary home outside of the New Orleans Jazz Museum (formerly the U.S. Mint) during last year’s Prospect.4 art exhibition.

The goal of the Besthoff Sculpture Garden has always been to introduce art to everyone. That’s why the Garden is free and open to the public seven days a week.

Walk around the back end of NOMA and you’ll see dozens of workers putting the finishing touches on several years-worth of work. Trees are being planted, bridges are being built, and art is being installed.You’ll also see plenty of City Park visitors taking pictures of the progress, and awaiting its opening.

They won’t have to wait much longer. The grand opening of the expansion is set for May 15, at 11 a.m. The public is invited and the event is free! You’ll find food trucks parked nearby if you want to grab a meal while you’re there.

If you can’t make it no worries, because the new and improved Besthoff Sculpture Garden will be open seven days a week, from 10 a.m. until 5p.m., every day after the grand opening. The Sculpture Garden is located at 1 Collins Diboll Circle.