Revelers take to the streets to enjoy the Krewe of Rex parade on Mardi Gras Day. (Photo: Cheryl Gerber)

When it comes to Mardi Gras, New Orleanians like to think we’re at the center of the universe. While we most definitely put on the largest and most fun free party in North America, the celebration of Fat Tuesday is much older than New Orleans. Let’s roll through some Mardi Gras history!

Mardi Gras (French for “Fat Tuesday”) is the last day of the “Carnival” season. The length of Carnival varies from year to year, because Easter Sunday doesn’t have a fixed date. Therefore, Mardi Gras has its roots in the liturgical calendar of the Catholic Church. The early Church converted folks from the worship of gods and emperors. Many of the pagan festivals held during the year were co-opted into the fledgling church’s calendar. 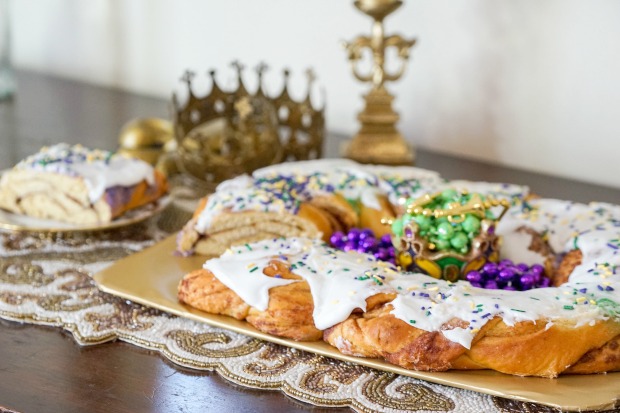 Since Christmas and Easter are the most important observances in the Christian world, the Church decided that the faithful needed some time to prepare themselves spiritually and physically for them. For Christmas, the preparatory period became known as Advent. The sacrifices of Advent were rewarded with Christmas celebrations. The Christmas season came to a close on King’s Day, (Twelfth Night, January 6th).

Celebrations started up again, before the serious time of fasting and penitence. This was called Carnival, from the Latin, “carne vale,” or “farewell to the flesh.” Carnival was the last time Christians could eat meat until Easter. The Bible says Jesus went into the desert for 40 days, so Lent begins 40 days before Easter. That forty-day countdown starts on “Ash Wednesday.” The day before was a day of feasting.

As Christianity moved into Northern Europe in the Middle Ages, the celebration of Mardi Gras became more formal. Barons and other lords would plan to make new knights on Mardi Gras. They feasted, then prepared for springtime battles by training and fasting during Lent.

It sounds like an artistic turn of phrase to say that Mardi Gras has been with New Orleans since its inception, but it’s historically accurate. The LeMoyne brothers, Sieur d’Iberville and Sieur d’Bienville, explored the mouth of the Mississippi River for France in 1699. They entered the river on Monday, March 2, 1699. That day was “Lundi Gras.” They made camp downriver from where Bienville (Jean-Baptiste LeMoyne) would establish New Orleans about 20 years later. Iberville (Pierre LeMoyne) named the camp area “Point du Mardi Gras.”

In the eighteenth and ninteenth centuries, Carnival in New Orleans was an informal celebration by individual families. Some folks would take to the streets, going from house to house, to celebrate.

The Spanish, who controlled Louisiana from 1763 to 1803, were much more conservative than the french. They discouraged public drinking and celebration. That let up a bit after Napoleon sold Louisiana to the Americans. By 1830, public celebration on Mardi Gras became an organized parade in Mobile, Alabama. People in New Orleans took to the streets, but in a more disorderly fashion. Beginning in 1837, New Orleans had parades, but they were rowdy, almost riotous. By the 1850s, the city leaders considered closing down public celebration of Carnival.

In 1857, a small group of businessmen, three of whom were from Mobile, decided to take steps to “save” Carnival. The men from Mobile were familiar with the “secret societies” there, like the Cowbellians. They formed a similar group in New Orleans, naming it the Mystic Krewe of Comus. The krewe held a tightly-organized, two-float parade on the night of Mardi Gras, 1857. After their parade, the Krewe held a private bal masque.

Adding the structure of a parade with floats saved Mardi Gras in New Orleans. The Comus parade caught on, but the Civil War and the Union occupation of New Orleans shut down the public celebrations. After the war, interest in holding other parades returned. In 1870, the Twelfth Night Revelers paraded on January 6th.

Two new organizations took to the streets in 1872. One decided to parade during the day on Mardi Gras. They decided to make their “king” the “King of Carnival.” They called him, “Rex.” Over 160 years later, the Rex parade is the premier parade on Carnival Day

Another secret organization formed in 1872, the Knights of Momus. They paraded on the weekend before Mardi Gras. Members of these early parades wore masks, maintaining their anonymity. Their organizations became closely linked to the business and political communities in the city.

The Krewe of Proteus, first paraded on Lundi Gras, in 1882. By then, interest in parades was widespread. A number of groups formed in the 1890s, including the first “marching club,” the Jefferson City Buzzards, in 1890.

Mardi Gras in the African-American Community

Since carnival organizations were excluded and segregated, the African-American community held their own celebrations, both formal and less so. Since one of the main purposes of the balls held by the Carnival krewes was to present the daughters of members to formal society (“debutante balls”), influential black families wanted to be able to do the same. In 1894, black businessmen and professionals formed the Original Illinois Club, to have their own bal masque.

In 1909, a group of black men held a parade, mocking Rex by putting one of their numbers on a float, “crowning” him with a tin can, and giving him a banana stalk as a scepter. That group formally organized in 1916, as the Zulu Social Aid and Pleasure Club, now one of Carnival’s most-respected organizations and popular parades.

Over the 20th Century, Carnival helped put New Orleans on the map as a tourist destination. Real-world royalty intersected with Carnival royalty in 1950, when Britain’s Duke and Duchess of Windsor (the former Edward VIII and Wallis Simpson) visited New Orleans for Mardi Gras. The couple attended parades, as well as the balls for Rex and Comus that evening. Womens’ organizations began forming in the early 20th Century. By the 1950s, several krewes, including the Krewe of Iris and Krewe of Venus took to the streets with hundreds of women riding and throwing.

By the 1960s, though, businessmen interested in tourism promotion wrestled with the problem of a big celebration on a Tuesday. A lot of tourists expressed interest in coming to the city for Carnival, but couldn’t take off the better part of a week to do so. In 1968, those businessmen formed the Krewe of Bacchus. They held their first parade on the Sunday night before Mardi Gras in 1969. The idea was to boost the weekend festivities, showing tourists a good time, and allowing them travel home on Monday.

Around the same time, a group of men from Gentilly and the Ninth Ward (mostly graduates of St. Aloysius High School on Esplanade and N. Rampart) formed a “neighborhood” krewe. They called it “Endymion.” They wanted to parade on the Saturday before Mardi Gras. The men of the Krewe of Endymion raised the stakes as their membership grew in the 1970s. What started as a neighborhood parade began to rival Bacchus. Endymion on Saturday and Bacchus on Sunday are a one-two celebration that leave revelers exhausted with two days to go!

Carnival parades spread into various neighborhoods of New Orleans over time, as well as the suburbs. Economics and the need for crowd control and law enforcement forced the city to pull the widespread celebrations into more-standard routes. Whether it”s Uptown, Downtown, or in the West Bank, carnival lives and thrives in New Orleans!