*Editor’s Note: While there are no travel restrictions to New Orleans due to the Covid-19, out of an abundance of caution and consideration for staff, vendors, performers, and guests, French Quarter Fest  has been postponed to October 1 -4, 2020. Please check the event website for details and updated information.

Over the course of four days, more than 1,700 musicians will perform on 23 separate stages across the French Quarter and the Mississippi Riverfront. More than 60 food vendors will also be on site serving some of the best, mouth-watering New Orleans cuisine. Simply put, you’re not going to want to miss this free festival. With a little planning, those heading to 36th Annual French Quarter Festival on April 11-14 from 11 a.m. until 8 p.m., can make the most of an incredible, only-in-New Orleans experience.

As lifelong New Orleanians with years of festival-going behind us, we’ve put together this guide so that you can experience French Quarter Fest like a local.

It’s best to pack a light day bag with the essentials: sunscreen, a hat, and a handkerchief or towel are necessities – it’s almost always sunny and can get a little hot and humid. Be sure to wear loose, comfortable clothing, and bring your dancing shoes, or at least ones you don’t mind walking around in. FQF covers a lot of ground in the French Quarter, so you’ll be walking and standing for long stretches.

Optional gear to consider includes wet wipes and napkins, koozies, a small umbrella or poncho, and a fold-up festival chair. Admission to the festival is free, but plan to bring cash for festival food and drinks (there are also ATMs throughout the festival grounds).

The best way to get around is on foot. The festival snarls traffic in the Quarter, so if you’re taking a cab or rideshare car from another part of the city, plan to get out on the edge of the French Quarter (near Canal, Esplanade, or Rampart) and walk to the main festival area. If you have the time, you could take a pedicab to crisscross from one end of the French Quarter to the other to take in some of the sights.

Consider your starting place and work from there so you can leisurely hop from one stage to the next without backtracking paths too often. We almost always start festival day at Jackson Square, taking in some traditional New Orleans jazz and a po-boy (usually the Vaucresson crawfish sausage po-boy or the Bourbon House barbecue shrimp stuffed po-boy.).

The French Quarter and Woldenberg Park are the perfect backdrops to enjoy the best New Orleans has to offer.Walking through the festival, you’ll be surrounded by music at nearly every corner. Jackson Square art vendors, street musicians, and small boutiques and galleries create the fabric of the neighborhood, whether during the fest or any other time of year. Be sure to stop and check them out.

French Quarter Fest is as much a food festival as it is a music festival, so plan to indulge. There are going to be new vendors offering delicacies that range from healthy (Fresh Mango Spring Rolls) to indulgent (Deep Fried Seafood Stuffed Bell Peppers). Some of the new vendors include Morrow’s, Café Maspero, Messina’s Runway Cafe, We Dat Chicken and Shrimp, and Landry’s Seafood. There are gluten free, sugar free, and Vegan options available. Check out the list of FQF vendors, and plan what to eat while you’re visiting a particular stage. Send members of your group out to different food booths nearby to get something different, then reconvene and share.

Nosh on traditional New Orleans staples like fried seafood, cochon de lait po-boys, jambalaya, and meat pies. If a restaurant has a specialty, “gotta have it” dish, chances are it’s at the festival. To stay cool at the festival, have a Plum Street Snoballs or a Luzianne Iced tea.

Outside food and beverages are not allowed at festival venues, but there’s no shortage of vendors selling everything from soda and water to local beer, cocktails, wine, and daiquiris. Tips from festival beverage booths directly support the musicians who play the festival, so keep that in mind. It’s too big of a festival for each band to pass the hat!

Hydrate, folks! Be sure to drink plenty of water, not only to wash down all that delicious food, but also to keep your energy up for walking and impromptu dancing when the spirit (and the beat) moves you.

Best of the Fest

There’s too much to see at French Quarter Fest – don’t feel like you need to do it all, because you can’t.

Many of our favorite local musicians will be back at the festival this year, including Brass-A-Holics, Irma Thomas, Sweet Crude, Jeremy Davenport, and lots more. There will be plenty of debut acts as as well, including Galactic, Lil Glenn & Backatown, The DayWalkers, Mykia Jovan, Buku Broux, Josh Benitez Band, and many more. Check out the full line up here.

We never miss exploring French Quarter Fest’s smaller music stages. We love the traditional jazz at the Royal Street or Bourbon Street stages; the musicians from around the world who play the International Stage at Dutch Alley in the French Market; and we never miss the swing dancing and hot jazz at the French Market Traditional Jazz Stage. The two stages at the Old U.S. Mint always have some of the most interesting, diverse music programming. The Mint is also where you go for boiled crawfish (and other tasty eats) during the festival.

Our advice is, if you have a particular band you want to see, stop and enjoy their set. Or, stay in one spot and enjoy all the acts on one particular stage. We generally move around after a few songs, as there’s always more food to be eaten and other music we want to hear. The journey (and sounds) while getting to the next place is all a part of the French Quarter Fest experience.

Enjoy the people-watching at Jackson Square, two-step at the Chevron Cajun/Zydeco Showcase stage, and take in a magical New Orleans sunset from any of the stages in Woldenberg Park along the Mississippi River. While getting to and from stages, you can experience hidden gems along the way: Classical music programming at St. Mary’s Assumption Church in the Old Ursuline Convent, the gorgeous courtyard at the Historic New Orleans Collection, and music in the Voodoo Garden at the House of Blues are all worth exploring.

Beyond the outdoor music stages, there are indoor special events to take in like Me Got Fiyo: Professor Longhair Symposium on Friday, April 12. Follow the path of the New Orleans icon from his early life in Bogalusa, Louisiana to his life in New Orleans and lasting influence on rhythm and blues, Carnival, the Mardi Gras Indians, and the essence of the Crescent City.

On Saturday, April 13, The French Market Traditional Jazz Stage and the Chevron Cajun-Zydeco Showcase will feature dancing and classes in Traditional Jazz, 1920s Charleston, Swing Dance, Cajun Jitterbug, and Zydeco. Classes are taught by professional dancers, are sponsored by Academy Sports+Outdoors, and are free and open to the public. See the French Quarter Fest website for the full schedule of special events. 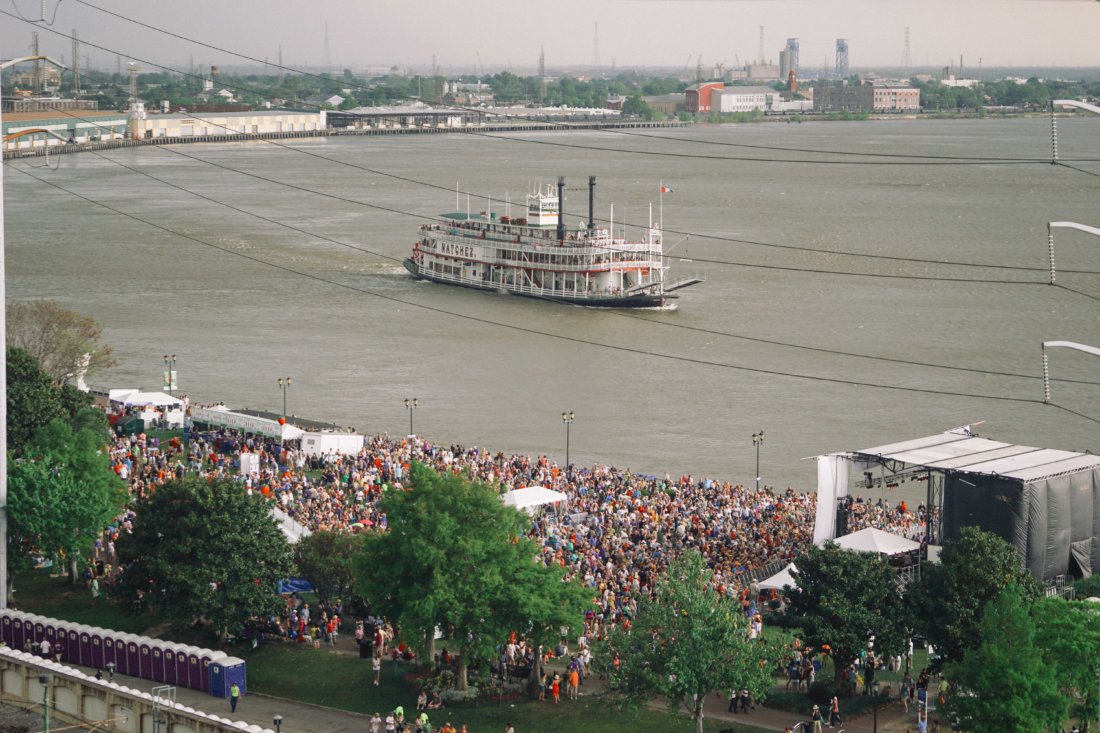 The steamboat Natchez passes (and docks) in front of the Abita Beer Stage in Woldenberg Park. (Photo: Paul Broussard)French Quarter Fest is kid-friendly. Head for the Chevron “STEAM” Zone (Science, Technology, Engineering, Arts, and Math) where you can take in hermit crab racing, test robots, play with water engineering sets, and find more fun, engaging activities for the little ones. There’s no one way to do French Quarter Festival, so you really can’t go wrong.