Nothing breathes new life into this city more than spring, as it ushers in more sunny days and brings us that much closer to Jazz Fest. With so many amazing artists, including both local and national headliners, it can be challenging to prioritize and figure out who to see. My trick is to go with my gut instinct on what artists to catch, even if it requires a bit of juggling. Here are my top picks for food and music at the second day of the 2014 New Orleans Jazz and Heritage Festival on Saturday, April 26. 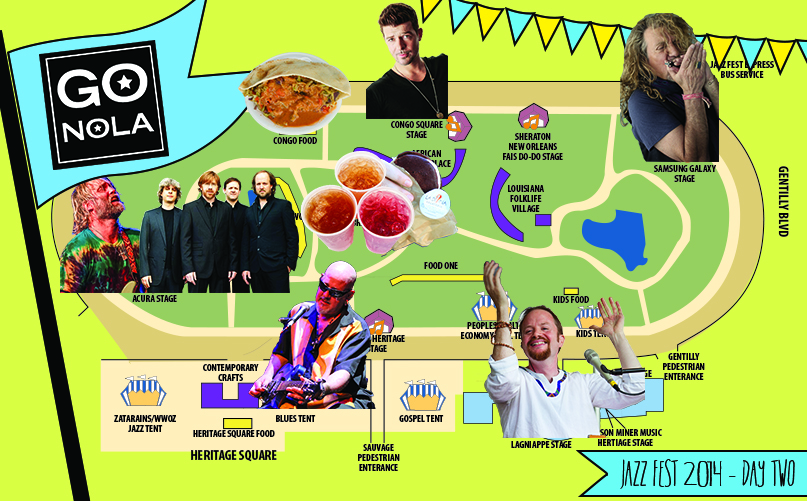 Sean Johnson is a pretty big name in the national yoga community, and he plays yoga and music festivals with his band, which bears the same name as his New Orleans yoga studios. Sean Johnson & the Wild Lotus Band are the first kirtan (call/response type) band to ever play Jazz Fest, and they are the perfect place to start off your Day Two.

Originally from California, John Mooney moved to New Orleans in the late 70s and forged his distinct sound here, a merging of Mississippi Delta country blues and the sounds of the New Orleans second line parade. Mooney is a blues guitarist and singer and has played with local artists like The Meters and Snooks Eaglin.

A New Orleans resident since 1985, Anders Osborne is also a blues guitarist and singer. He has been active in the music scene since shortly after arriving in New Orleans.  His latest two releases, “Black Eye Galaxy” (2012) and “Three Free Amigos” (2013), have received great reviews and he’s been touring constantly. I have wanted to see him live for a while now so this is a great afternoon choice.

While I wouldn’t go so far as to call myself a die-hard “phan,” I did have the pleasure of watching Phish perform in San Francisco during their 2009 reunion tour and it was a wild experience. Phish is a jam band that formed in the early 1980s and their sets usually contain several very long songs. They are very interactive with their audience and have somewhat of a cult following; I am excited to see them again and experience their unique energy. I’ll be catching Phish from 4:00 – 5:30 p.m.

After catching the first part of Phish’s set, I’ll squeeze in Robert Plant from 5:30 – 6:30 p.m. Although Robert Plant’s solo career is now much longer than the time he spent as the legendary front man of Led Zeppelin, it was in the latter capacity that he won my heart and became one of my favorite singers.  He is an emotional, eccentric, and extremely talented performer and I have yet to see him live, so I’m pretty excited about his set. His most recent project, the Sensational Space Shifters, is roughly two years old.

Hopefully Robin Thicke will save the best for last, because I will be ending my day with his show from 6:30 – 7 p.m. If no press is bad press, this past year has been a great year for Thicke as he’s made countless headlines for his controversial songs and performances. His popular hit, “Blurred Lines,” was in constant play on the radio last year, but I’m more into his earlier work, so here’s hoping he brings out the old favorites, too!

I’m definitely interested in one of the newest additions to the Jazz Fest food menu, which is Gambian Foods’ spicy grilled tofu and veggies with peanut sauce.  I’m a fan of expanding local options to include more choices for vegans and vegetarians, and this sounds delicious. This item replaces the grilled veggie pita and Gambian will still offer its grilled steak pita and couscous with yogurt sauce.

Sometimes you know you need to drink water, but it’s just not exciting – that’s the beauty of a great iced tea. Herbal teas have the added benefit of being caffeine free, and this year the mandarin orange herbal iced tea from Sunshine Concessions is back on the menu, along with their rosemint herbal tea and regular iced tea.

This local business offers amazing Italian ice cream made from scratch. Give their old fashioned handmade gelato sandwich a try for a tasty spin on the typical ice cream sandwich. It’s rich enough to satisfy your sweet tooth and give you that boost you need to keep on festin’.