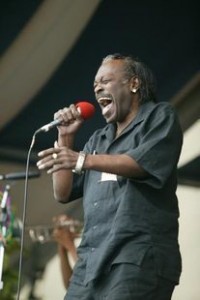 While still just a youngster growing up on the mean streets of New Orleans’ Central City, Theodore Emile “Bo” Dollis became drawn to the Mardi Gras Indian tradition. Unbeknownst to his family, he masked with The Golden Arrows for the first time in 1957, at the ripe old age of 13.

Since then, Bo’s made a name for himself with the Wild Magnolias Mardi Gras Indian Tribe, for whom he was named Chief in 1964. Known for having “a voice as sweet as Sam Cooke, but rough and streetwise,” he’s led hundreds of Carnival second lines, as well as barroom jam sessions. But he’s also shared that authentic New Orleans music far and wide, having played everywhere from Carnegie Hall in New York City to the Smithsonian Folklife Festival in Washington, DC, to gigs across the European continent.

Despite battling illness for the last several years, Big Chief Bo Dollis will make his annual appearance along with The Wild Magnolias at Jazz Fest on Sunday, May 6 at 4:25pm on the Jazz & Heritage Stage.