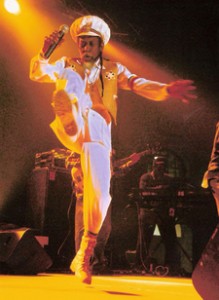 Singer/songwriter and percussionist Bunny Wailer (born Neville O’Riley Livingston) was destined for reggae royalty when his dad moved in with Bob Marley and his mom. Young Bunny and Bob were raised as stepbrothers in Kingston, Jamaica, and went on to form The Wailers with Peter Tosh in 1963.

After leaving The Wailers in the early 70s, Bunny founded his own record label and embarked on a solo career that has garnered three Grammies and much acclaim.

Now considered a respected elder statesmen of the Jamaican music scene, Newsweek magazine dubbed him one of the three most important musicians in world music. At age 65, he continues to tour, playing the songs that made Bob Marley & The Wailers famous, as well as his own roots style music, often filled with his political and spiritual messages.

Bunny Wailer will play Jazz Fest on Friday, May 4.