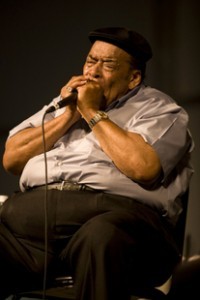 James Cotton is the real deal. The Grammy Award-winning master of the blues harmonica grew up working the cotton fields of Mississippi with his parents and eight brothers and sisters, and his father served as the local Baptist preacher every Sunday. Does this sound like the recipe for a true bluesman, or what?!

And how many other musicians can say they learned their craft and the ways of the road from blues legends Sonny Boy Williamson, Howlin’ Wolf, and Muddy Waters?

Credited with helping to define modern blues harmonica, James Cotton, a.k.a, “Superharp,” has been showcasing his soul-wrenching moans and train whistle wailing for 68 years. He’s played countless juke joints, as well as major music venues alongside artists such as Janis Joplin, Grateful Dead, and Led Zeppelin.