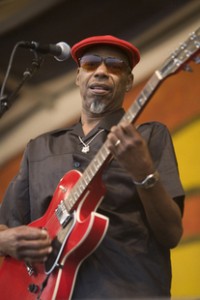 Walter “Wolfman” Washington  is the human crossroads where blues, funk, and R&B come together and marinate to create a unique, powerful sound. A New Orleans guitar and vocal legend, Washington got his start in the early 60s, working with Lee Dorsey and Irma Thomas . He ventured out on his own to make a name for himself in New Orleans black clubs in the 1970s and 80s, eventually garnering national attention through acclaimed albums and appearances. Still going strong, Washington released Doin’ the Funky Thing and Live at the Maple Leaf in 2008.

Washington can be found grinding out the groove every Sunday at the Maple Leaf Bar in New Orleans, alongside organist Joe Krown and drummer Russell Batiste, Jr.  He will be playing with The Roadmasters in the Blues Tent at Jazz Fest from 2:55-3:55pm on Saturday, April 28.